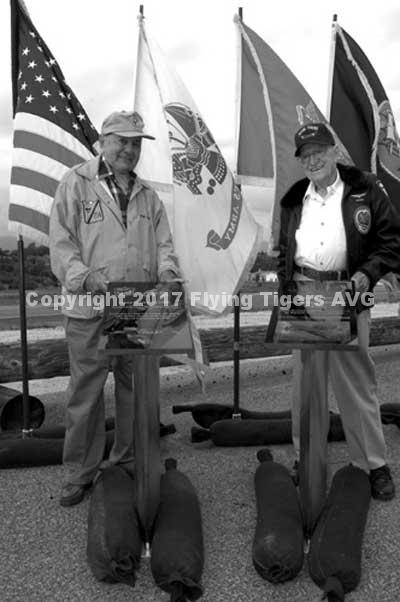 PHOTO: Fred Losch, left, and Dick Rossi, right, stand by their hall of fame plaques at the Fallbrook Air Park. The pair are the first inductees to the Fallbrook Aviation Hall of Fame.

FROM THE PACIFIC FLYER MAGAZINE:

Rossi is a 6.5 victory ace with the famed American Volunteer Group, better known as the Flying Tigers. In 1941 and ’42, the AVG surmounted huge odds during their brief but illustrious combat tour in China. When that group disbanded, Rossi remained in China, flying “The Hump” for the Chinese National Aviation Corporation. After the war, Rossi was a founding member of the Flying Tigers cargo airline.

Both men have strongly supported FFCAP, Wilson said. Rossi and Losch were inducted by the FFCAPark during a simple ceremony at the Air Park’s viewing common. Highlight of the ceremony was a fly-by of a P-40 Warhawk and an F4U Corsair, as flown by Rossi and Losch during World War II. Both airplanes were supplied by the Planes of Fame museum in Chino, Calif. The P-40 was flown by John Hinton; the F4U by John Maloney. Because both airplanes are fitted with jump seats and FFCAP members Mike Smith and Bonnie Wills were along for the ride.